Celebrating 50 years at KW Habilitation is an exciting accomplishment, but our history goes back even further than 1971.  We would not be able to properly honour our golden anniversary if we first didn’t mention the dedicated and hard-working group of parents who came together in the 1950s.  With concerns about their children’s needs, their future, and together sharing the belief that their children should not be excluded from our community, these parents worked together to grow and pioneer the development of programs to help improve the lives of their children.  Like many community services and programs for individuals with developmental disabilities, KW Habilitation was started by families. In addition to developing programs for their children, these families also began the long process of educating the public about the needs of people with developmental disabilities.

Working alongside these founding families, the KW Kinsmen have played a huge role in building and shaping KW Hab.  They started the Kinsmen TV Auction in 1955 for the purpose of serving the “Community’s Greatest Need”, and the auction is now the longest-running TV show of its kind in North America.  Thousands of dollars, and thousands of hours have been contributed to KW Hab from the Kinsmen and Kinettes in Kitchener-Waterloo.

In 1958, with financial assistance and support from the KW Kinsmen and a great deal of fundraising, the New Dawn School opened.  A few years later, in the mid-1960s, the McQuarrie school opened.  Both of these schools provided day programs and education for children with special needs. 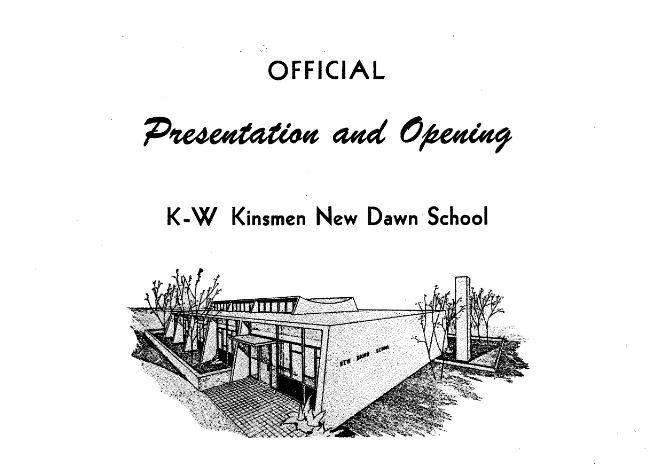 Archive image of the opening of the K-W Kinsmen New Dawn School in 1958.